The Development
Crown 515 is a multi-use development on a prominent site on Crown Street in Surry Hills by Smart Design Studio. It has combined a heritage controlled terrace house with a new build component to create a series of apartment units and commercial premises which now graphically wrap around a corner site along three street frontages. The façade and building form interact with the local community and landscape, emphasising neighbouring building heights, scale and angles, and reflecting back complimentary shadows and form
Working with Smart Design Studio and the builders, Calida, Cantilever provided highly detailed responses to a complex site and changing design brief. The project comprises 5 apartments, and 3 commercial tenancies incorporated within a site that sandwiches in and around an existing heritage listed terrace house. The building form exaggerates and plays up this situation, enhancing and wrapping the new builds around the existing terrace in various interpretations of the traditional terrace house. The building forms appear weightless, activated and floating as one moves around the three street frontages. New build angles mimic victorian roof pitches and scale. 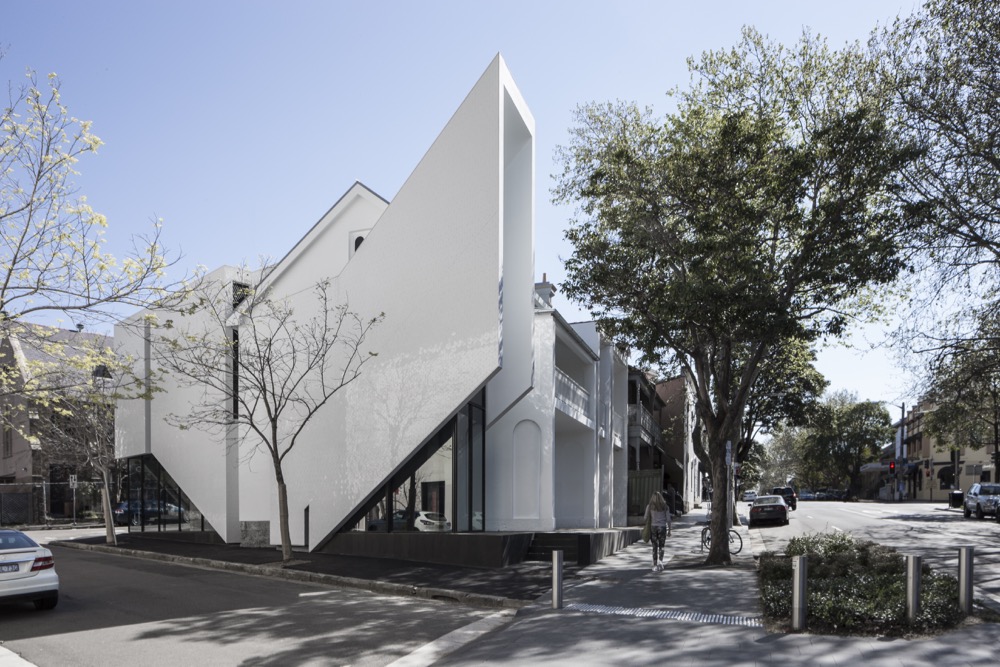 The structural design works to make those components appear effortless, with steel framing and concrete base structure concealed and revealed in tandem. Steel framing across the southern facade creates the base for soaring boxes and shapes and an intricate tiled face. Inside thick composite walls of concrete and blockwork work to create thermal mass and reduce the entire buildings reliance on, and use of, air conditioning. The structural masses of concrete columns which run up through the building are exposed and shown as they are - structure which is explicitly used as a design feature. Existing walls which weave between the buildings have been worked to accommodate new loads and maintain a sense of structural integrity and synthesis with existing building forms. 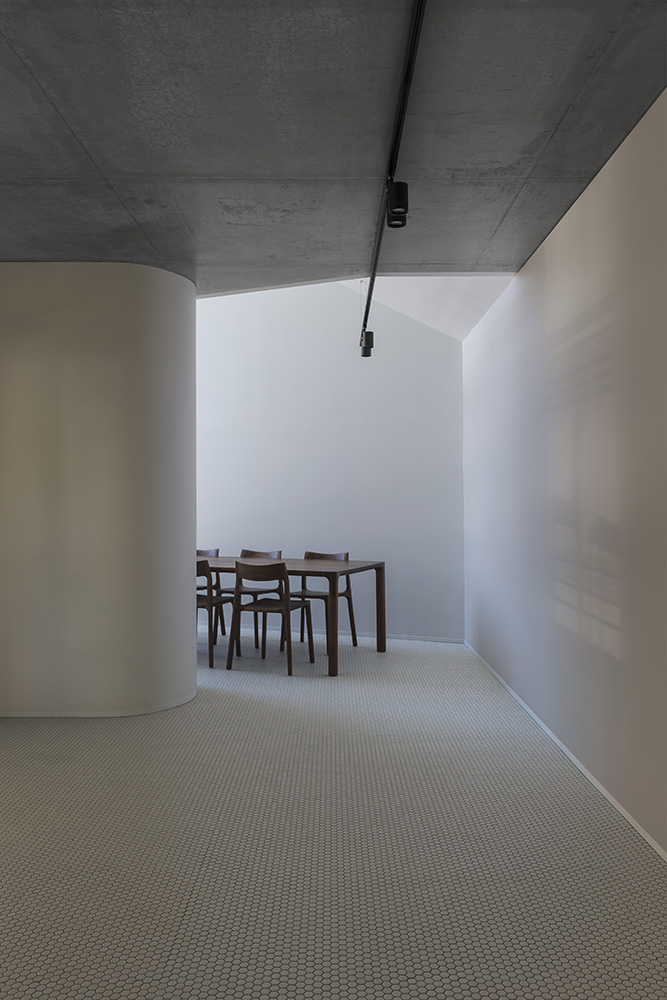 Of particular structural note is the fact most of the structure is cantilevered - the side facades and designed angled panels cantilever off the concrete slabs, and the concrete slab in turn cantilevers off the central core.
As you walk down the lane beside Crown 515 it is easy to miss the subtle fact that the tiled façade does not touch the ground. It cantilevers vertically down from the first floor and stops at its lowest point just a few millimetres from the ground, before extending back up diagonally to the top tip of the building. Top hung sliding glass doors extend behind the pristine white tiled façade and appear to disappear behind the facade. The façade cuts up diagonally from in front of these doors at a similar angle to the 150 year old heritage terrace house roof that sits behind it. What is perhaps even more striking is that the first floor slab that supports the façade cantilevers out from the central core of the building more than 4m, while also wrapping itself around the heritage terrace. 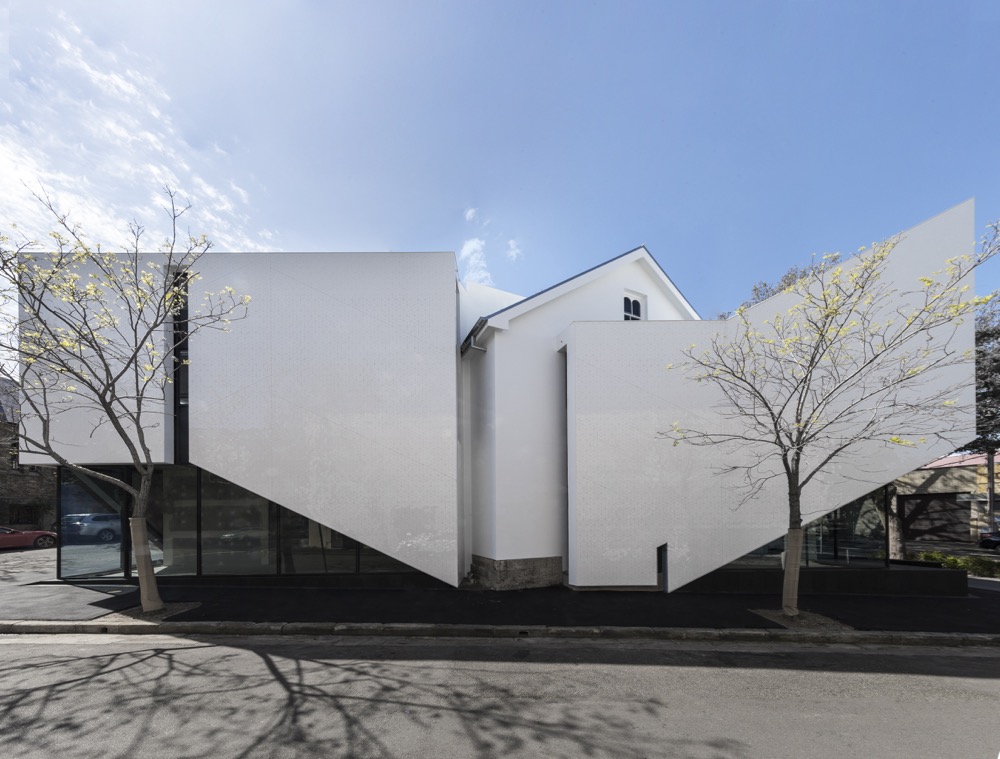 The tiled façade has rigorous design constraints required to make it perform as both a design element, and as a functioning wall. A high level of deflection control was required to ensure the tiles do not crack; to ensure the adhesive used to support the tiles does not delaminate, and to ensure the entire façade does not appear to ripple as the sun casts down the line of the building. The substrate structure needed to be the exact dimensions of the tiles so that there were no irregularly cut tiles and the entire facade appeared cohesive once clad. A 90 minute fire rating was required for NCC compliance.
The obvious solution to this would be to construct this wall using concrete as the main structural wall. This would easily achieve the deflection control and fire requirements. The challenge was that the facade is supported off a 4m cantilevered floor slab. Supporting a heavy concrete wall off the end of such a large cantilever was not a viable option physically or financially.
The solution was to construct the façade using a light weight steel frame which hung off the cantilevered first and second floor slab. By using both floor slabs we were able to control the deflection of the frame. It also allowed us to cantilever the façade down towards, but not touch, the ground. 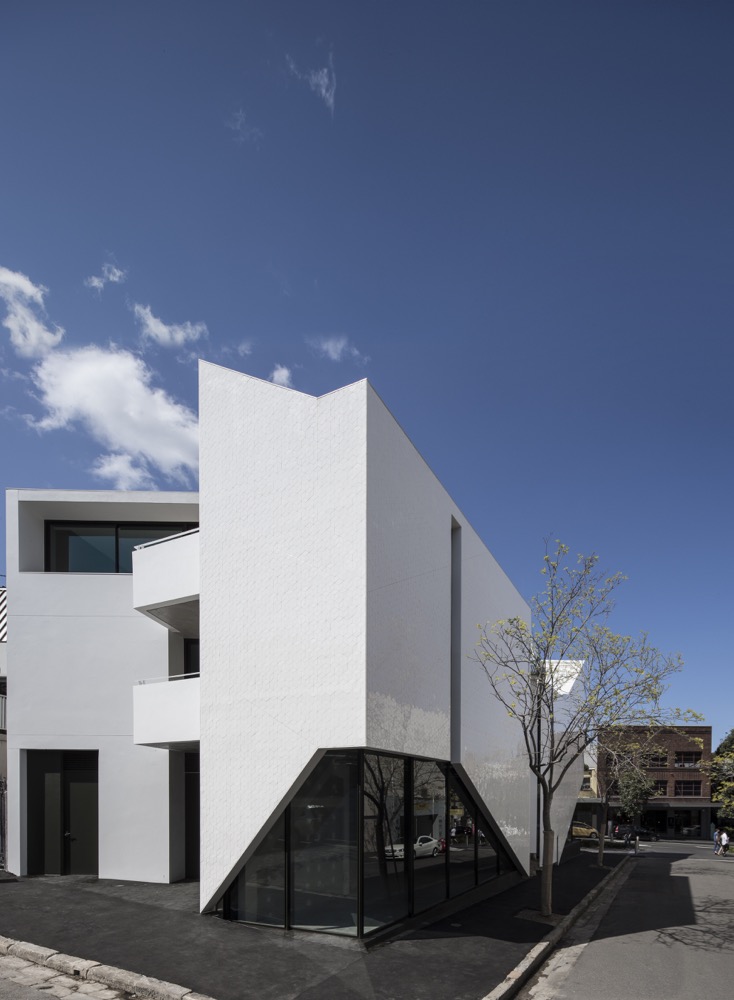 In amongst this frame is the fire rated cladding: Promat. Many weeks of careful detailing and discussions with experts and detailed weight calculations were done to achieve the required fire separation between the commercial and residential fire compartments.
On top of all this were concerns about the dimensions of the wall to suit the tiles. Detailed calculations of the structure, subframe and secondary wall build up were continuously being undertaken to ensure they fit within a few millimetres of tolerance. While on site the setout was also being continuously checked and calculated. At one point the builder ran into an issue with the top tip of the building being 40mm too high to suit the tiles. After many days of discussion, and with the builder and architect stumped about a solution, Cantilever proposed the solution that was ultimately used. We simply rationalised that rather than start the layout of the tiles at the base of the wall (where the first lot of tiles would be first installed) we proposed to start the setout at the top tip of the building and work down. The lower portion of the wall and lower parapet were easily adjusted slightly to suit the tile dimensions. 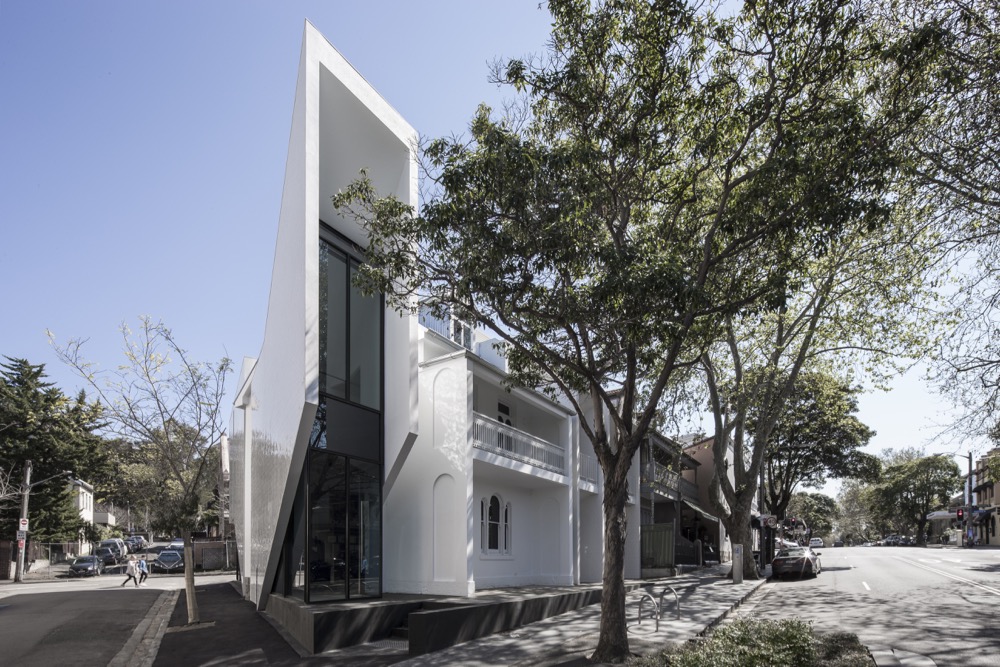 A key component was stabilizing and retaining the original chimney - maintaining its integrity and form through the building and to the streetscape. We believe that saving original features such as chimneys adds to the streetscape particularly in dense inner city areas where original detail is easily discarded. The chimney breast was removed through the lower portions of the building through some delicate underpinning and propping (of both building and chimney). This is no easy feat considering the crumbly weak condition of the old lime mortar brickwork.
Crown 515 now sits proudly in the Surry Hills vernacular, and its forms and the weightlessness of its hanging structure have been recognised with a number of architectural industry awards.